I wrote a fake oral history of Windows 95. It’s in its second printing now. Woo! 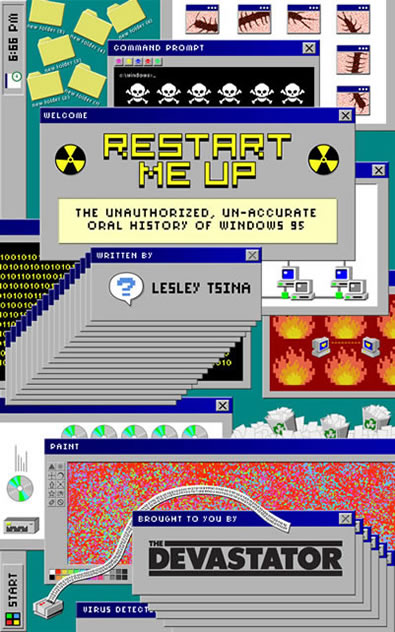 Go behind the Blue Screen of Death to meet those who made Windows 95 possible: the Microsoft programmers who were addicted to snorting Pixy Stix, the marketers who used mass hypnosis to trick the press, the software testers who battled a literal giant bug in the code, the visionary director of the Windows 95 Cyber-Sitcom Instructional Video, and “Mighty God” Bill Gates, who jumped over a chair.

This is the oral history of the biggest software event of the 90s. Bigger than if Beanie Babies and the Macarena came on CD-ROM and also ran Microsoft Word. For the first time ever, read the untold, unbelievable, largely untrue story of the creation of Windows 95.

“As someone who still runs Windows 95, Lesley Tsina’s book was a valuable and much needed collection of information to finally get me to stop.”
– Wyatt Cenac, The Daily Show

“Lesley is one of the weirdest people I’ve ever met. Thank god she found a way to put it into book form.”
– Matt Besser, Upright Citizens Brigade

“Restart Me Up is an absolute tour-de-force of both form and function, with nary an error message or bum note to be found. Thumbs way up.”
– Michael T. Fournier, Razorcake

“Clearly, she put her Swarthmore degree in theater to good use. It reads like a movie script, but with jokes about X-Files fan fiction and Comic Sans.” – Pam Harris and Kate Carter, Swarthmore College Bulletin

The Dork Forest: Lesley Tsina on Windows 95, Mandarin, and Baking

Check out the book GIF!

Where to buy it

Or you can get it from me directly by emailing info at lesleytsina dot com and I will send you one with funny things written in it.